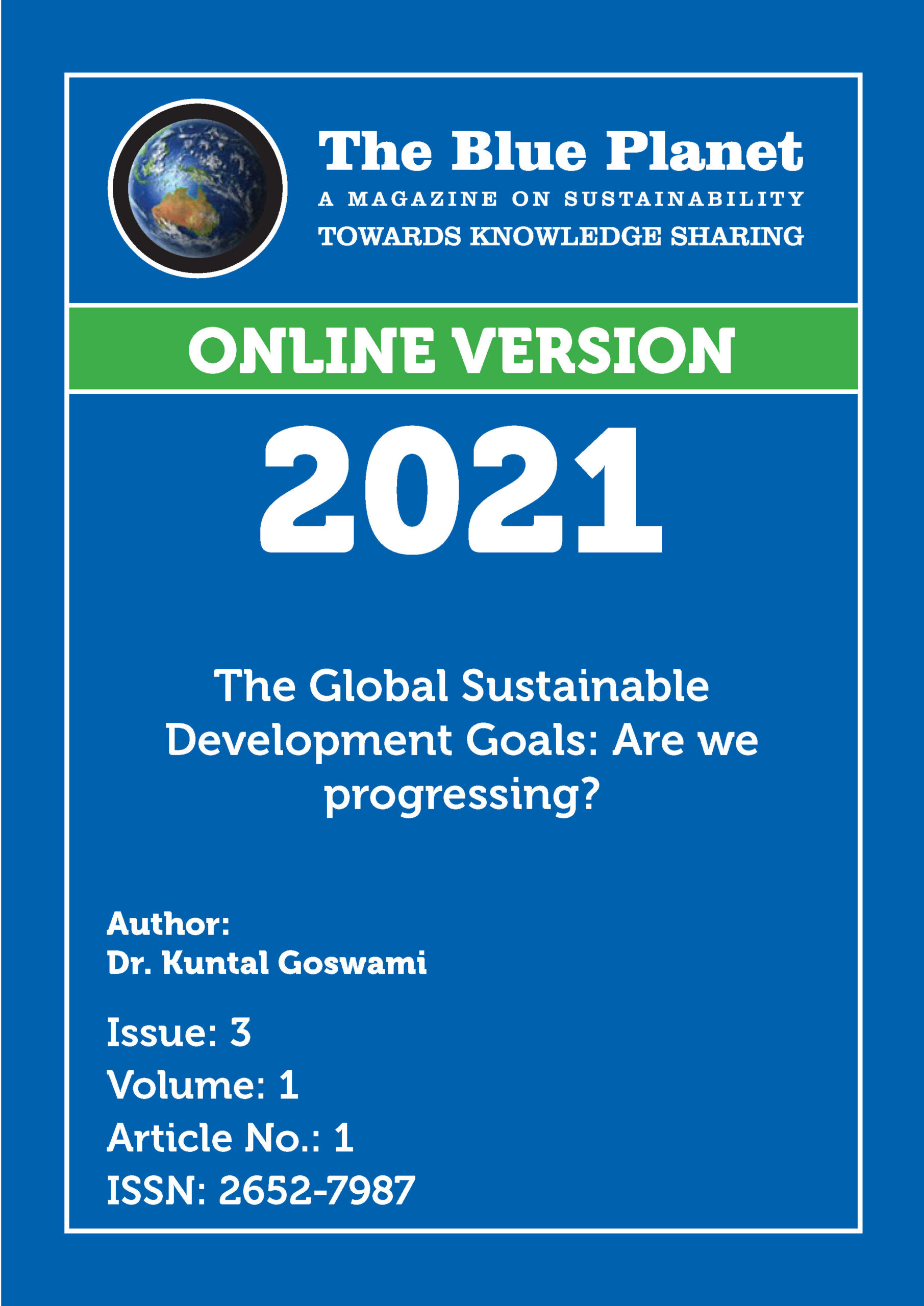 The Global Sustainable Development Goals: Are we progressing?

In 2015,all member states of United Nations adopted the global Sustainable Development Goals(SDGs). In contrastwiththe Millennium Development Goals (MDGs),which weredevelopingcountriescentric andhad 60 indicators, SDGs are universal and addresses issuesfor both developedand developing countries. The SDGs are all encompassing with 17 goals and 169 associated targetsaddressing global objectives for economic development,alongwithsocial, and environmentalsustainability.

In this brief status report, 2016 and 2020 data sets were compared to understand the global progresstowards the Sustainable Development Goals.

In the overall SDG ranking, Sweden and Denmark are in the top-ranking countries in both 2016 and2020.

Amongthecountries,theCôte d’Ivoire, Burkina Faso, and Cambodia have progressed most in termsof the SDG Index score, while Venezuela, Zimbabwe, and the Republic of the Congo have declinedthemost in the SDG index scoreover the time period.

Other than Sweden and Denmark,veryfew countrieshave been ableto maintain their SDG rankingbetween 2016 and 2020. Some ofthe othercountrieswho were able to maintain their ranking includeAustria, Ireland, Malta, Albania, Morocco, and few others.

Upper-middle-income countries are eitheron track or performing moderately well in most of the areasexceptSDG-14: Life Below Water; SDG-15: Life on Land; and SDG-17 Partnership for the Goals.

High-income countriesmostly performed positively in most of the SDGs except in two areas whereperformancearestagnating:SDG-13 Climate Change Action;andSDG-14: Life Below Water.

In regard to government strategies and policy actions for climate mitigation, the Sustainable Development Report (2020) highlights that only six countries (Bhutan, Costa Rica, Ethiopia, India, Kenya, and the Philippines) have made sufficient commitment and effort to hold global warming well below 2°C. Unfortunately, economically stronger, or bigger countries such as the United States, the Russian Federation, Saudi Arabia, Turkey, Ukraine, and Vietnam are categorised as “critically insufficient” for their low level of commitment to mitigating climate change. 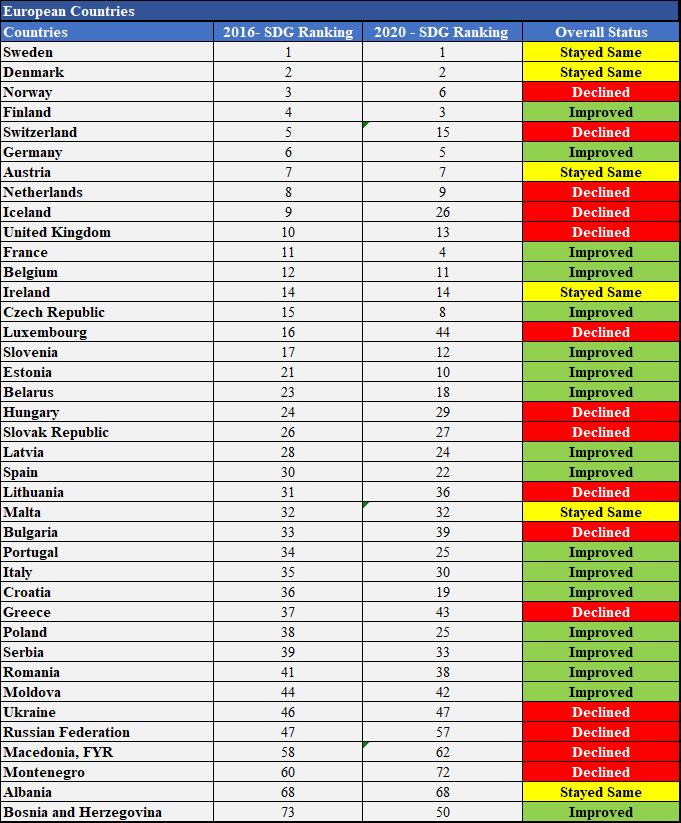 Although Europe as a region has performed better than the rest of the world, there remain are wide disparities in equity across European countries and across population groups.

The Leave No One Behind (LNOB) Index, which measures inequalities within countries, showed Eastern and Central Europe face significant challenges in terms of material deprivation, access to care, quality education, greater poverty, and lack of infrastructure including broadband internet connection.

Persistent high internal inequalities in many European countries are also impacting their  overall SDG rankings. Overall, assessment shows goals related to responsible consumption and production, action against climate change, and biodiversity loss are most concerning and the trajectories in these indicators show the actions being undertaken to achieve these goals by 2030 are largely insufficient.

Among North & South American countries, Canada, Chile, United States, Costa Rica and Uruguay are the overall top five SDG high ranking countries. At the same time, Venezuela, Argentina and Brazil are the only three countries in the region that have shown no progress in comprehensive attainment of the 17 SDGs since 2016. Venezuela is the only country which is losing its SDG index score because of its declining performance on SDG-1 No poverty, SDG-2 Zero hunger, and SDG-3 Good health and well-being.

On the other side, Argentina and Brazil have shown no progress in the last five years due to declining trends on SDG-8:Decent work and economic growth, and SDG 16 Peace, justice and strong institutions respectively. 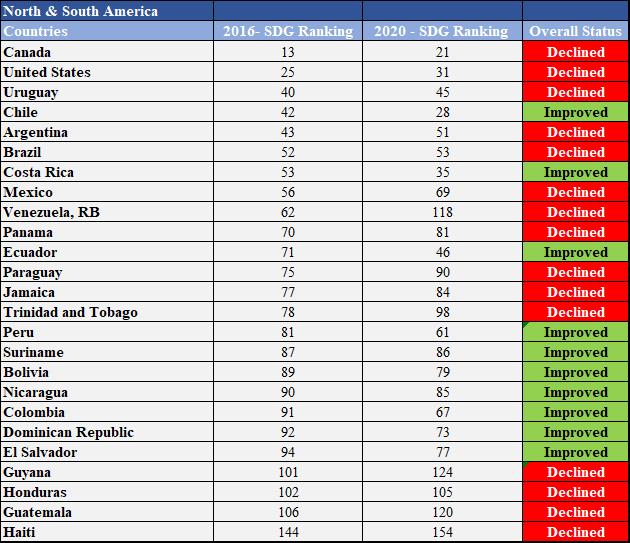 Among all the North & South American countries, only 43% of countries in the region have been able to improve in their SDG ranking in 2020, compared with their 2016 SDG ranking.
In the South American region, the lack of innovation due to relatively low public expenditure on R & D, high income inequalities, insecurity, high homicide rate, and corruption are the biggest challenges. 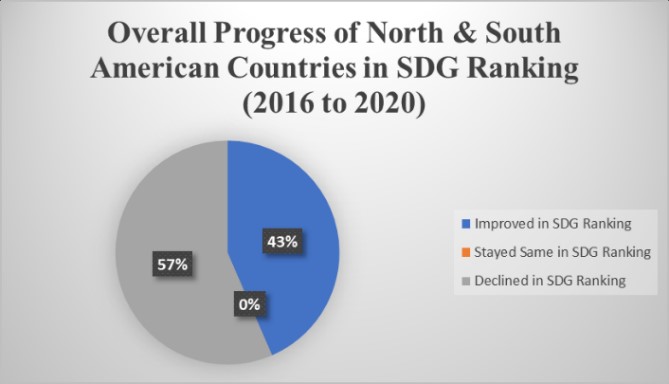 Among African countries, only 12% of all countries have been able to improve their SDG ranking in 2020, compared with their respective 2016 position.

SDG-3 Good health and wellbeing, SDG-9 Infrastructure, and SDG-16 Peace, justice and strong institutions are the most critical areas for the continent. However, the continent is performing relatively better in SDG-13 Climate action, and SDG -12 Responsible consumption and production. The most important fact from the African continent is that 94% of the countries have eighter shown the significant requisite commitment to set-up institutional arrangements for successful  implementation of the SDGs or aligned their national development plans with the SDGs. 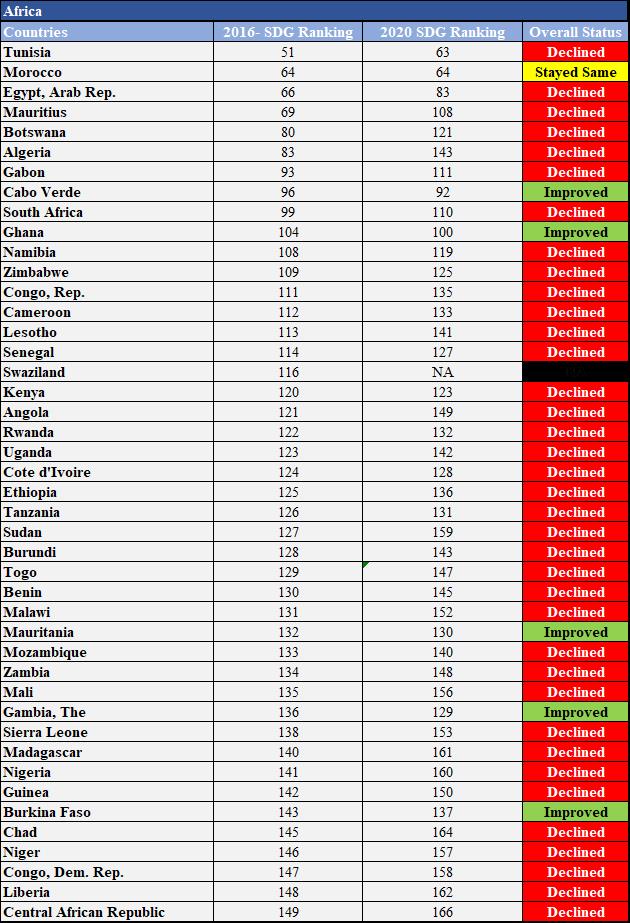 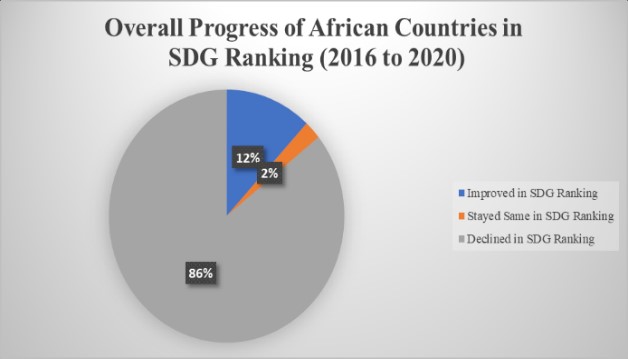 In the Asia & Oceania region New Zealand, Japan, South Korea, Cyprus, and Australia are the top five better ranking countries in 2020.  In this region, 39% of all countries have been able to improve their respective SDG ranking in 2020 compared with their 2016 overall ranking.

The region has made reasonable progress on SDG targets relating to economic growth, SDG-4:Quality Education, along with food security, women’s role in decision making, access to basic sanitation services, reduction in maternal mortality, child mortality, R&D for health. Some elements of progress also made in SDG-7:Affordable and clean energy.

Over the years the region has made considerable progress in SDG-1:No Poverty, SDG-2:Zero hunger, SDG-3:Good health and well-being, SDG-5:Gender equality, SDG-6: Clean water and sanitation, SDG-8:Decent work and economic growth, SDG-15: Life on land, SDG-16:Peace, justice and strong institutions, and SDG-17:Partnership for the goals.

At the same time, the region faces many others challenges and reverse trends in targets such as their share of renewable energy, climate change policies, loss of biodiversity, sustainable / inclusive industrialisation, human trafficking, and non-discriminatory laws. Within the region there have been varying degrees of progress. For example: North and Central Asia have progressed in reducing inequalities (SDG-10); whereas South-East Asia has regressed in SDG-10. South South West Asia has made the most progress in SDG-3:Good health and Well-being. South East Asia progressed most in SDG-4: Quality Education, and SDG-9 Industry, innovation and infrastructure. East and North East Asia have improved in SDG-2:Zero hunger, SDG-4:Quality Education, and SDG-6:Clean water and sanitation. 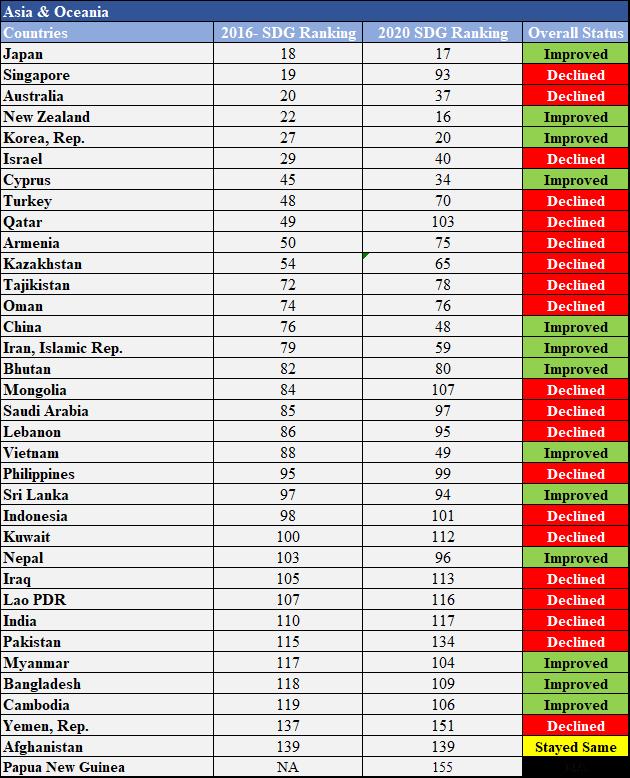 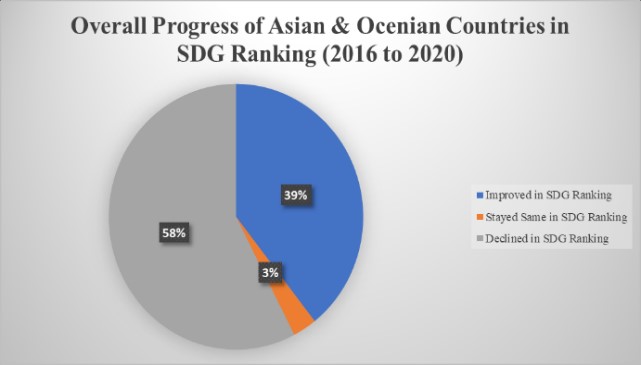 Within the Asia & Oceania region, South Asia   is one of the most populated regions. It is  home for about 22% of the world’s population (which is a population of about 1.76 billion, as of 2016’s data).

The region has one of the largest concentrations of  the under-privileged population, with acute caste system issues, a high number of dowry deaths and honour killing issues, farmers’ suicides.

water and sanitation problems, environmental degradation and server pressures for wild-life and biodiversity. Within the SAARC region, Bhutan, Maldives, Sri Lanka, Nepal and Bangladesh are the better performing countries as well as improving their respective ranking.

Australia is among the high-income OECD countries. Compares with its 2016 SDG ranking Australia has dropped position from 20th overall ranking to 37th position. According to the Sustainable Development Report 2020 Australia is in the  “On Track” or “SDG achieved”  category in only in SDG-3 (Good Health and Well-being). In other SDGs, such as SDG-5: Gender Equality and SDG-8: Decent work and Economic growth Australia is in the “On Track” category, however, the agendas are categorised as “Significant challenges remain”.

In the following SDGs, such as: SDG-10: Reduce Inequalities, SDG-11:Sustainable Cities and Communities, SDG-13:Climate Action,  SDG-14:Life Below Water, SDG-15: Life on Land, and SDG-17:Partnerships for the goal, the country’s indicators are  classified as “stagnant”, with varying degrees of challenges ranging from significant to major. SDG-12:Responsible consumption and production remains one of the major challenging areas for Australia.

In the rest of the SDG indicators the country  has achieved a moderate level of improvement with varying degrees of challenges.

The overall region-wise analysis showed that from 2010 onwards countries in East and South Asia have progressed the most and a similar trend has been noticed since implementation of the SDGs in 2015. African countries made significant improvements during  the MDG period (2000 – 2015) but since 2015 these countries have made some progress in SDGs. Furthermore, on average, countries; in Latin America, Caribbean, Eastern Europe, Central Asia, Middle East, and in North African regions, have increased their SDG index score by more than one point.

The SDG trend analysis highlights indicators relating to SDG-1:No Poverty, SDG-9:Industry, Innovation, and Infrastructure, and SDG-11:Sustainable Cities and Communities have made the most rapid progress since 2015. Globally, access to basic transport infrastructure, broadband connection, and global investment in R&D have shown the most promising trends. At present, about 95% of the world’s population is covered by 3G or higher-quality mobile networks, which is one of the most significant universal achievements.

In conclusion, I would like to highlight that even though progress in SDGs between 2016 to 2020 shows mixed success, the impact of Covid-19 may have  wiped out gains in the areas of poverty reduction, employment, health and reducing income inequality. Only future data will demonstrate the extent of such losses.