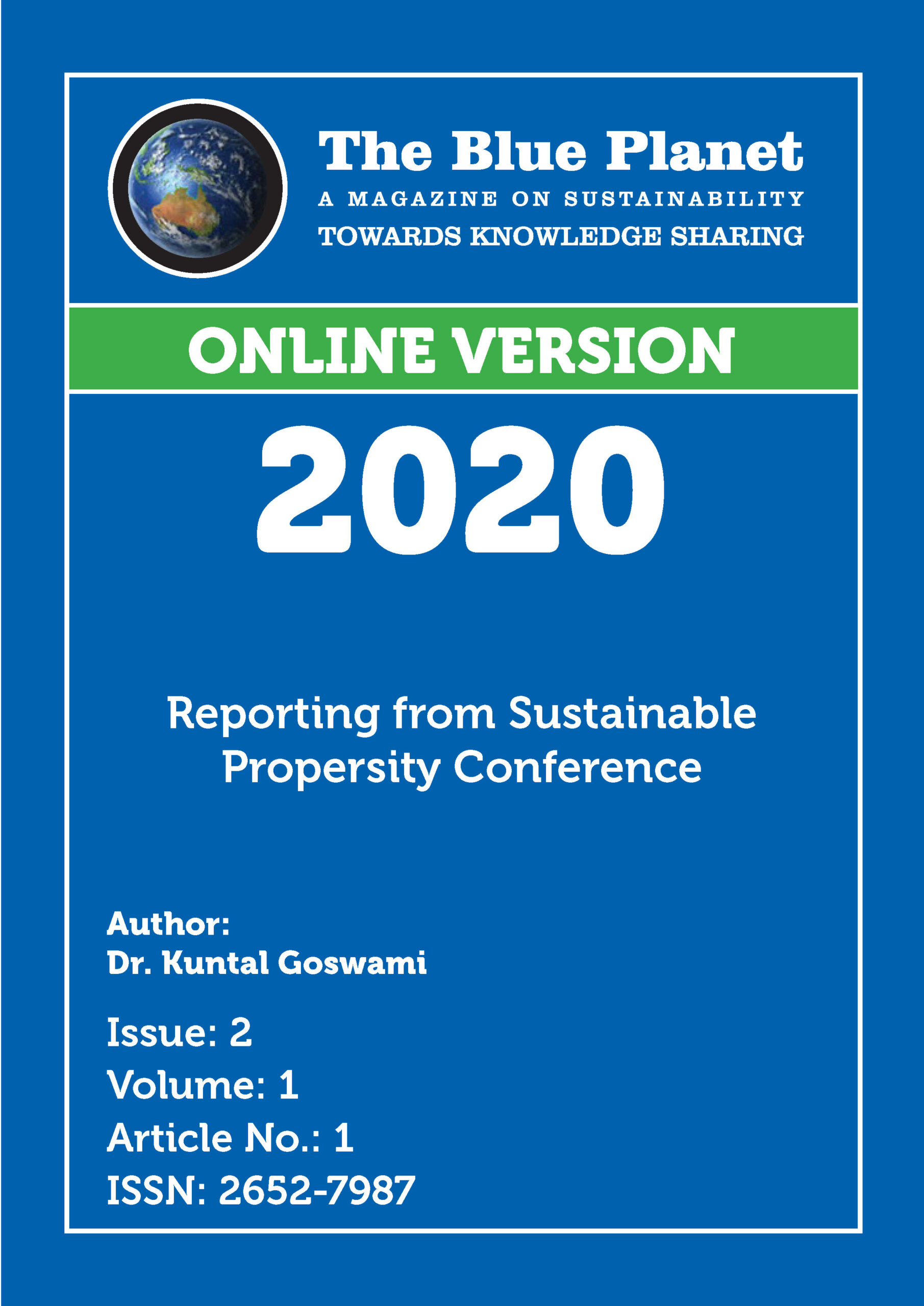 The three-day Sustainable Prosperity Conference in Adelaide at the University of Adelaide Campus was a congregation of some of the world’s most progressive economists and thinkers from various fields. The conference strongly advocated for progressive economic reforms, improving the fairness of the economic system, and to undertake resolute action on climate change. The conference included 28 distinguished speakers, with some of the most notable being Prof. Herman Daly, University of Maryland; Prof. Robert Costanza, Australian National University; Dr Steven Hail, University of Adelaide; Assoc. Prof. Philip Lawn, Wakefield Futures Group; Alex North, Australian Unemployed Workers’ Union; and Emeritus Professor Bill Mitchell, Chair in Economics and Director of the Centre for Full Employment and Equity (CofFEE), an official research centre of the University of Newcastle in New South Wales.

Some of the key topics of the conference was : an overview of economics for sustainable prosperity, modern monetary theory, the potential for a job guarantee scheme to contribute towards economic stability and social justice, the feasibility of a rapid transition to 100% green and renewable energy,  the political economy of a new green deal, and an appropriate way to measure genuine progress, how to conceptualise a sustainable future and many other thought-provoking policy agendas.

One of the high points of the conference was a presentation on the Modern Monetary Theory (MMT) by Prof. Bill Mitchell. He explained the myths around budget deficits and surpluses. According to Prof. Mitchell, budget deficits and surpluses are neither good nor bad. Rather, we need to understand these two concepts in their appropriate context. Prof. Mitchell explained these myths through number of simple graphical models. He argued that, in one sense our liability or obligation to pay taxes gives worth to our fiat currency. If this obligation is not there our fiat currency has no value and will be otherwise worthless. Hence, the sequence of this argument is: Tax Liability => Spending => Tax Payments. The tax liability creates a demand to get back the money that is flowing through the economy. The government cannot get its tax revenue until, or unless, it is spent (in this argument, banking is not included). 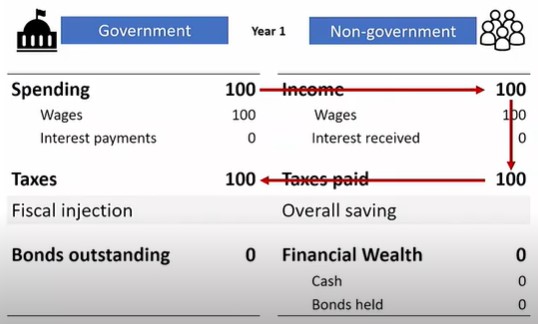 In period two, suppose that government increased spending, but kept the tax collection target the same as the first period, then the fiscal injection by the government sector will increase. Consequently, the overall savings and financial wealth in the non-government sector will increase in the same proportion, as shown in the diagram below. In this context, Prof. Mitchell argued that in an economy, the government deficit is the same as private sector savings and wealth dollar for dollar. 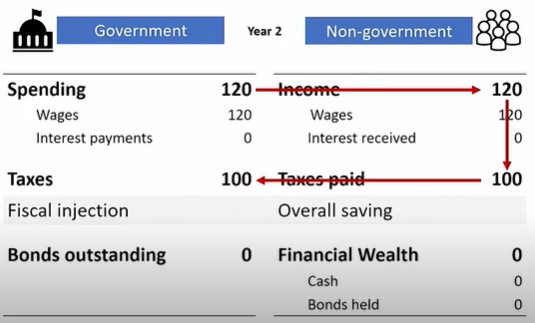 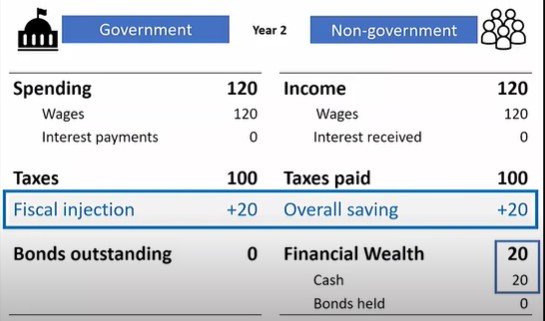 Now he introduced another factor, fear of the International Monetary Fund (IMF). 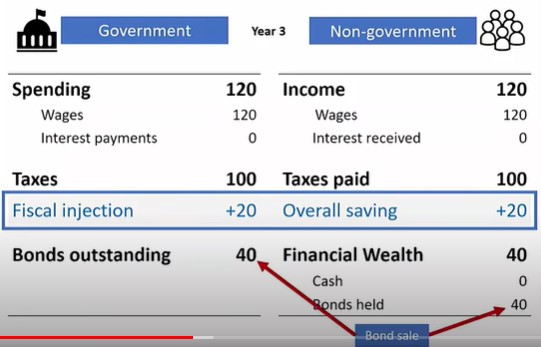 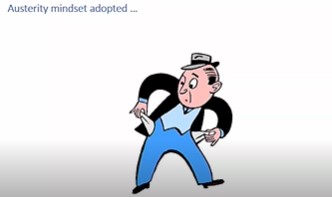 Hence, in the fourth period, under pressure of IMF the government adopts austerity and cuts back government sector spending (reverses fiscal injection). Immediately the non-governmental sector’s earnings reduce, as shown below. 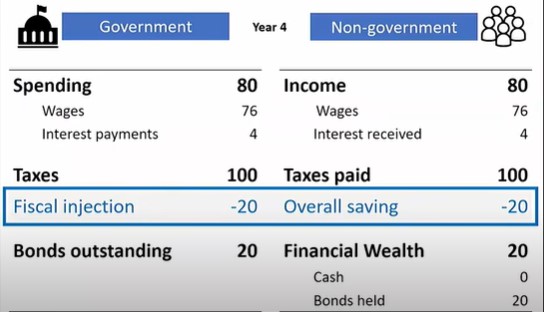 However, this is a simplistic explanation. Having said that the underlying principle is general public’s overall saving or wealth cannot generate if government squeezes it fiscal injection (liquidity).

Basically, public debt is untaxed spending, or the amount that has not yet been taxed away.

But the question is, what is an appropriate fiscal position?

Hence, we must understand the context to ascertain the appropriate size of a fiscal deficit. If the non-government sector is not capable of achieving full employment in the economy, then the government must run a deficit.

Emeritus Professor Bill Mitchell also has a web-page on the University of Newcastle’s website: https://www.newcastle.edu.au/profile/bill-mitchell

In contrast, ecological economics provides a real picture. It identifies economy as a sub-system of the non-growing natural environment. However, a major flaw in our education system is that ecological economics is an elective subject and very few universities offer the subject.

Prof. Daly also added that it is important to consider the costs and benefits of expanding the economy. It is prudent to assess how much we should expand the economy by sacrificing the eco-system.

One of the high points of day three was the presentation by Prof. Robert Costanza (Bob Costanza), the VC’s Chair in Public Policy, Crawford School of Public Policy, Australian National University (ANU). Prof. Costanza presented on ‘The Importance of Natural Capital’.

Prof. Costanza mentioned that aspiration to have  sustainable wellbeing  for all needs: a) a vision (how is the world? how we would like it to be? a shared vision); b) tools and analysis (systems thinking and modelling); and c) implementation (new institutions and strategies).

However, in the present system, we are operating through an “empty world” vision in which we think we can grow indefinitely based on factors of production (land, labour, and capital), with the idea being that the more we consume, the more we will have individual’s welfare.

Prof. Costanza argued that we must transit from this empty world vision to a full world vision. We need to understand that we are living within the ‘Earth system’ which is materially closed, and we must realise that not all our well-being comes from the consumption of goods and services. Instead, well-being comes from relative consumption, rather than absolute consumption, of four types of capital. The natural capital (everything itself in the system which we didn’t build, which is a part of nature and provides a range of services which we often don’t acknowledge enough), human capital (not just their labour, but also the health and well-being of the individual), social capital (formal and informal interaction among people, friends, and families, as well as our culture and institutions. The market itself is a part of social capital), and conventional built capital (which we have build).

However one of the most thought-provoking panel presentations was entitled Really Ending Poverty and the Future of Work by Alison Pennington, Alice Clark, David Faber, and Alex North.

Alison Pennington, from The Australian Institute, Centre for Future Work, mentioned that there was a steady decline in Real Private Capital Spending in  Australia between 2012-2019 and, as a result, there is an over-supply of under-utilised work. The official unemployment rate in Australia is 720,000, or 5% of the population, but this is just the tip of the iceberg. There are large numbers of under-employed people, or people who are only marginally attached to employment. Statistically speaking, 20% of Australians don’t have enough work. 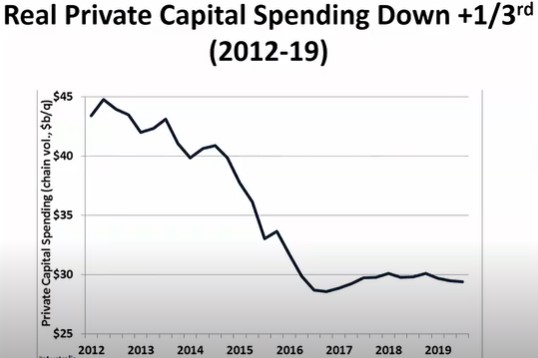 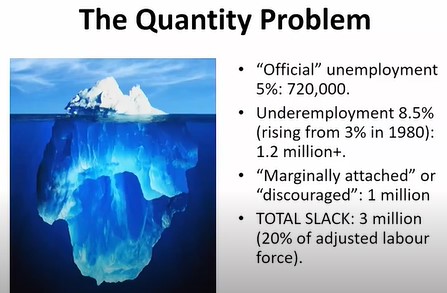 We end up with low-paying and low-quality jobs, which is pushing many towards a hand-to-mouth situation. As a result, the gap between real productivity and real wages is increasing at the same time as there the labour share of GDP is falling 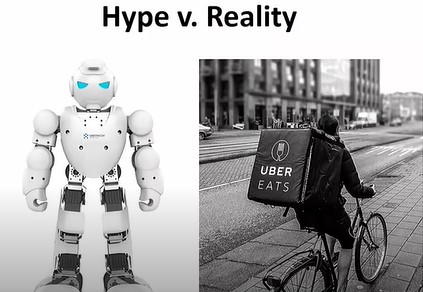 Alison Pennington strongly advocated for the revival of quality full employment, and her key recommendations were to stimulate the growth of anchor industries that succeed in the global market; to create jobs in green industries; and to facilitate mobility and opportunity.

Alex North (Australian Unemployed Workers’ Union) was also part of the panel, and presented on the state of private sector-based unemployment support services in Australia such as Jobs Statewide, JP Job Prospects, Match Works, Status Employment Services, and Workskil Australia. There are currently 1,635 private sector-based employment service providers, which is more than the total combined number of McDonalds stores in Australia, New Zealand, and South Korea. This unemployment support service industry is worth A$10 billion and is publicly funded. This industry receives up-front public funding to operate so that these agencies can find a job for unemployed people, as soon as possible and to monitor activity tests and job seeker compliance.

Alex North mentioned that, in actual reality, caseworkers in these job active agencies … spend about half their time on compliance and administrative activities alone and only 10 per cent on actually canvassing the labour market. Unemployed workers suffered 2.35 million payment suspensions by job active providers in 2018-2019, with an error rate of over 50 per cent.

He further added that if someone gets injured in the Work for the Dole scheme, she or he will not be eligible for any work entitlement. Rather, unemployed people will be punished for not meeting the activity test criteria. All job active agencies get paid by government for meeting these activity test criteria. The system is so punitive, that people prefer to go for the lowest paying job on the market, rather than enrolling in the Job Active system. The full video of this presentation is available at the conference website: https://mmt-adelaide-2020.com/ (click video tab).

These are some of the key highlights from the 2020 Sustainable Prosperity Conference. Presentations from other speakers are available on the conference website.